Every time Bracknell pensioner Howard Dobson walks past his local haart estate agency, he does more than give them a cheery wave. He pops in and donates money to their Magic Moments children’s charity, which takes youngsters with life-limiting illnesses to Disneyland Paris.

Howard, 77, has been popping in for the past five years with cash and jars of pennies and loves to hear how his donations are making a difference to children and their families, who are nominated for the trip by hospices across the UK.

As a thank you, the staff invited him to their Christmas Lunch to present him with a memento of the most recent Magic Moments Disney trip as a reminder of all the lives he’s helped and changed through his generosity.

Howard explained: “There is always someone worse off than ourselves and I believe we should always help where we can. I’ve always tried to donate to charities, especially those that help children.

“I love the name Magic Moments – because it really is just that, magical! It makes everyone feel magic, those who organise it, those who attend and those who donate. It’s a great feeling helping to add kindness to the world, and everyone should do the same.

“I was honoured to join the Bracknell branch at their Christmas lunch and look forward to hearing stories from the recent Magic Moments trip.”

Kassandra Hopkins, haart’s Move Manager, said: “Howard is a breath of fresh air. He donates so often and does not expect nor want anything in return. He is completely selfless! The world is just such a better place because of people like Howard. He just really loves helping others, especially those in need.

“Howard has been coming into our branch for over five years, and each time he enters with a big smile and a cheery hello, we all just can’t help but smile. If he can’t come in and see us, he texts our landline number, so we still get a little greeting and well wishes every day or he walks past giving us a big wave. We feel Howard is an extension of our haart family, and we include him where we can, including our own Christmas Lunch.”

Emma Barber, Chair of Magic Moments, said: “Without the support of local heroes like Howard and our staff, Magic Moments Children’s Charity would not be able to create these amazing memories for these families in the way that we do. 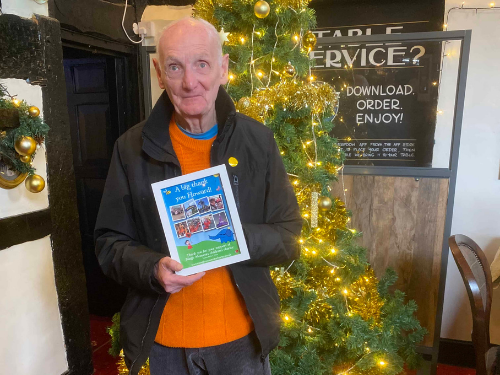 YOUR HOME MAY BE REPOSSESSED IF YOU DO NOT KEEP UP REPAYMENTS ON YOUR MORTGAGE. Spicerhaart introduce to Just Mortgages Direct Limited which is an appointed representative of The Openwork Partnership, a trading style of Openwork Limited, which is authorised and regulated by the Financial Conduct Authority. Just Mortgages Direct Limited Registered Office: Colwyn House, Sheepen Place, Colchester, Essex, CO3 3LD. Registered in England No. 2412345